Thank you to everyone who joined us on Tuesday, April 5, 2022, for the Dean’s Distinguished Lecture Series and the panel discussion with our benefactor, Mr. Harris Rosen, UCF President Dr. Alexander Cartwright, and Rosen College Dean, Dr. Youcheng Wang.

If you were unable to attend the event in person, you may watch the lecture via the Rosen College YouTube Channel.

To honor Dr. Abraham Pizam, founding dean of the Rosen College of Hospitality Management on the 50th anniversary of his achieving his Ph.D., the Dean’s Distinguished Lecture Series for 2020 – 2021 took a look at the evolution of the hospitality and tourism industry through the eyes of some of the pioneers in this field of education.

Seven lectures were presented in the Dean’s Distinguished Lecture Series, beginning on October 28, 2020 and concluding in April 2021. Please scroll down the page for detailed information on the lecture series. 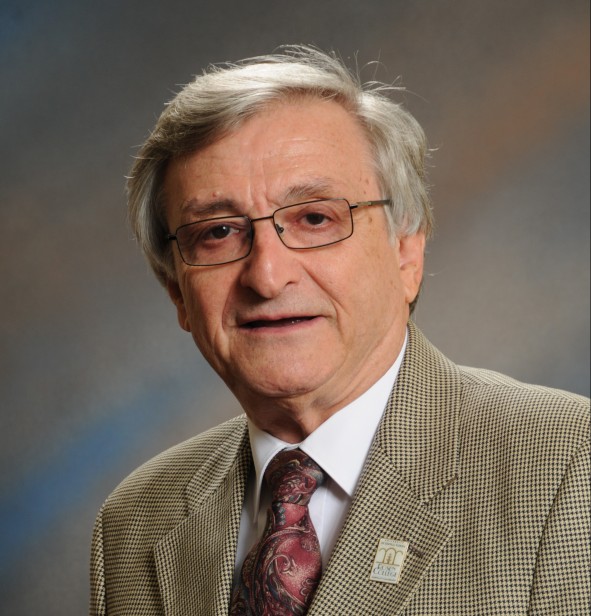 Some Socio-Psychological Correlates of Innovation within Industrial Suggestion Systems

The main postulate of this study was that industrial innovation as manifested in a suggestion system is a product of some personal characteristics that an individual possesses which are constrained by some structural characteristics of the organization. Industrial innovation was operationally defined as “Bringing something new into existence or use, through an industrial suggestion system.”

The study was conducted in two middle-size industrial organizations in the North East United States, (NCR and Corning) having a similar suggestion system for more than 10 years. One hundred employees were administered two psychological tests (Remote Association and Social Differentiation) and one survey questionnaire of six questions. Information relating to the subjects’ suggestion making records was gathered from the two companies’ suggestion departments. Information relating to the subjects’ jobs was obtained from the personnel departments of the two companies. Information relating to a person’s motivation, satisfaction, idea source, rarity of suggestions, and supervisory encouragement was collected through the questionnaire. The foremen (totaling 43) of the above-mentioned subjects were administered the Social Differentiation test. 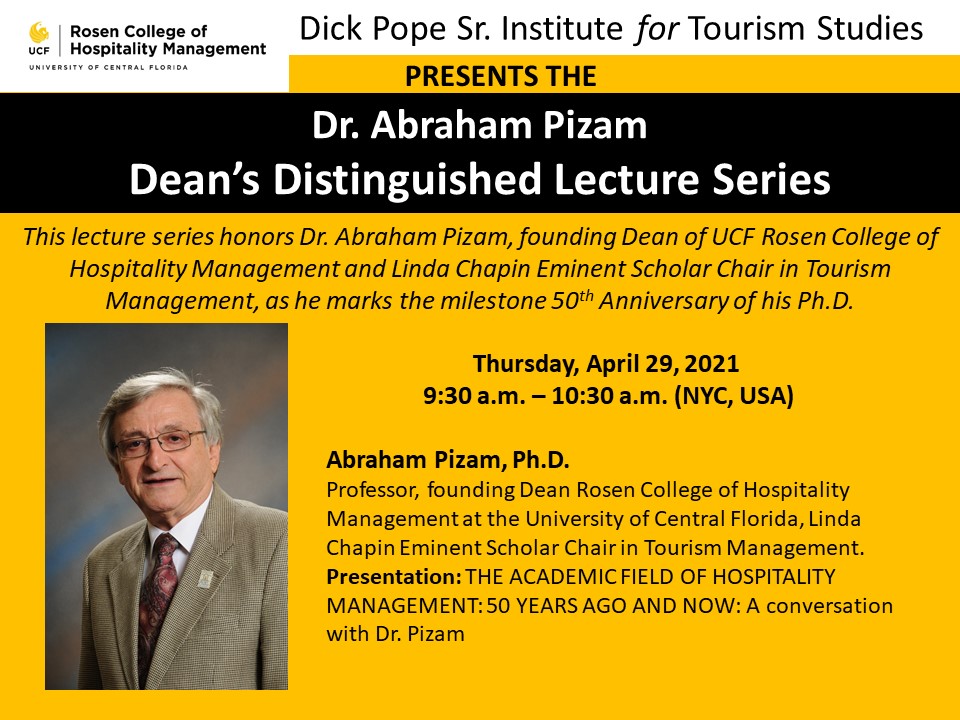 Abraham Pizam Ph.D. is the founding dean (2000-2018) of Rosen College of Hospitality Management at the University of Central Florida. Currently he serves as Professor and Linda Chapin Eminent Scholar Chair in Tourism Management. Professor Pizam is widely known in the field of Hospitality and Tourism Management and has conducted research projects, lectured, and served as a consultant in more than 30 countries. He has held various academic positions, in Austria, Australia, France, Israel, Japan, New-Zealand, Singapore, Slovakia, Switzerland United Kingdom and the U.S.A,  has authored more than 250 publications of which 180 were scientific publications and published ten books. His publications have resulted in more than 20,000 citations and an h-index of 66. He is Editor Emeritus of the International Journal of Hospitality Management and serves on the editorial boards of 26 academic journals. Professor Pizam has conducted consulting and research projects for a variety of international, national and regional tourism organizations.

Professor Pizam holds a Master’s degree from New York University and a Ph.D. from Cornell University, and is the recipient of several academic awards. 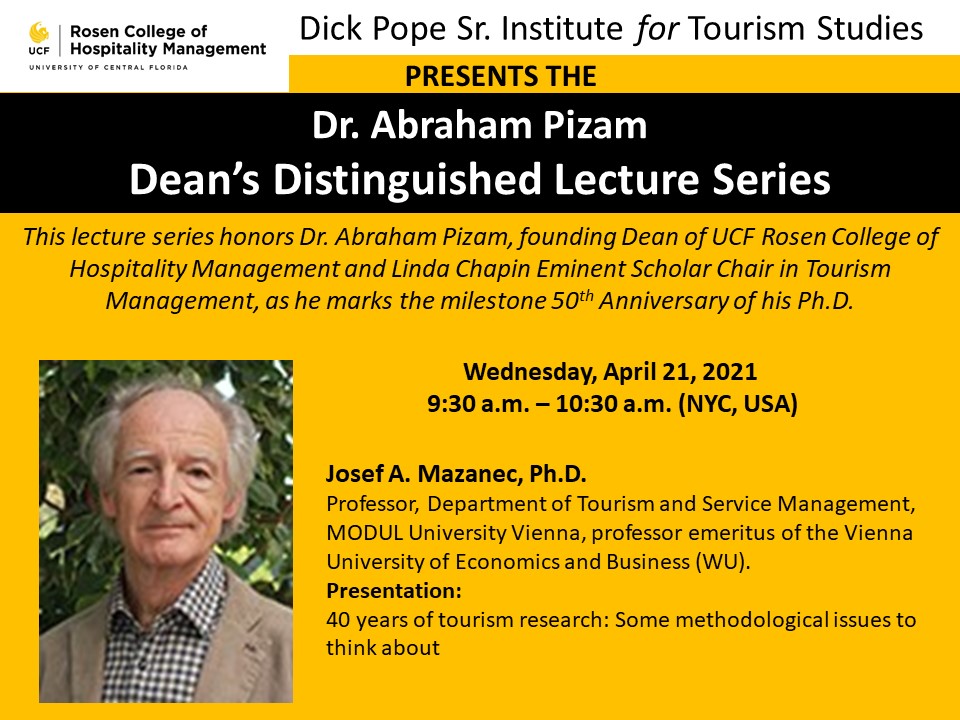 Josef A. Mazanec Ph.D. is a full professor at the Department of Tourism and Service Management at MODUL University Vienna and professor emeritus of the Vienna University of Economics and Business (WU). He functioned as head of the Institute for Tourism and Leisure Studies of WU from 1981 to 2010. In 1992 he was a visiting scholar at the Alfred P. Sloan School of Management, MIT. During 1997-2002 he served as the Vice-Rector for Research of WU and in 1997-2000 as the Speaker of the Joint Research Program on “Adaptive Models and Systems in Economics and Management Science” (comprising researchers from WU, Vienna University of Technology, and University of Vienna). He is a founding member of the International Academy for the Study of Tourism and has served as editorial board member for numerous tourism and marketing journals. His research interests are in consumer behavior, multivariate methods, decision-support systems, and marketing and management science applications in hospitality and tourism. For more on publications, research and teaching see http://raptor.mazanec.com:3000/ . 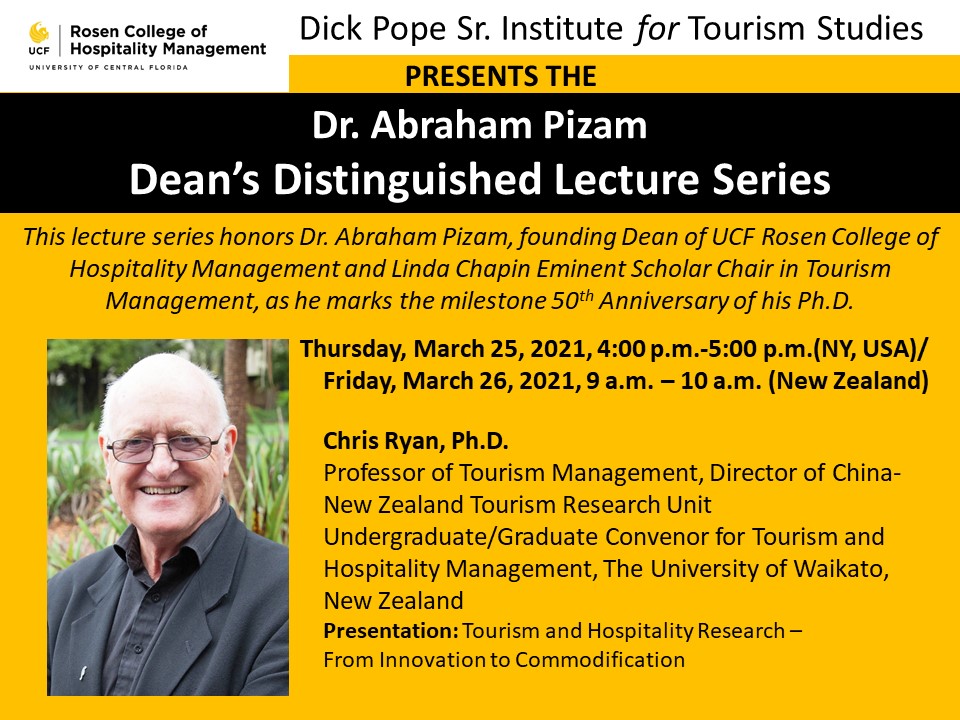 Chris Ryan Ph.D.  is Professor of Tourism at the University of Waikato Management School, where he is the Director of the BUU China-New Zealand Tourism Research Unit, and the Waikato INSTO Research Centre of the UNWTO. He was editor of Tourism Management for 25 years, started the journal, Tourism Management Perspectives and currently is Editor of Tourism Critiques: Practice and Theory. He gained his doctoral degree at the Aston Management School in the United Kingdom. He has held full-time positions in Australia, the United Kingdom and Australia, and has also taught in Canada and the United States, and has held visiting positions in China, Macau and Hong Kong. Having degrees in economics and psychology permits him to engage in both quantitative and qualitative research, even as he attempts to incorporate research undertaken in China with that conducted in New Zealand, which requires some understanding of both Western and Asian traditions of thought. 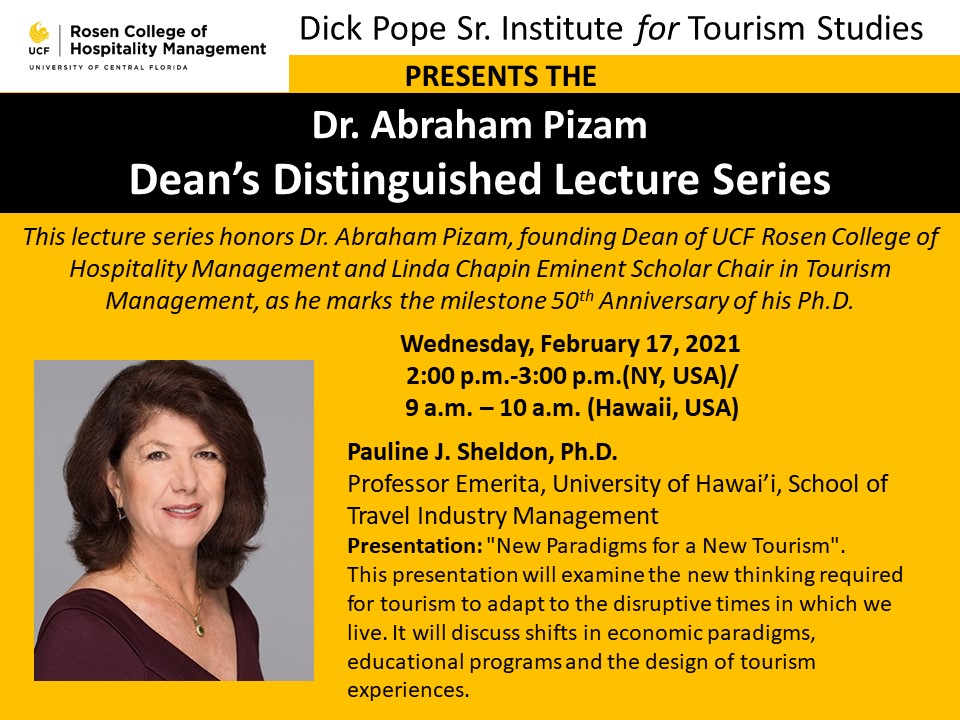 Pauline J. Sheldon is Professor Emerita, University of Hawai’i, School of Travel Industry Management where she also served as Dean.  She holds a PhD in Economics, an MBA, and a BS in Mathematics. Her research areas include sustainable and regenerative tourism, social entrepreneurship in tourism, transformative and wellness tourism. She has published seven books, and over 70 peer-reviewed research articles. Her most recent book is titled Social Entrepreneurship and Tourism with Daniele, and her most recent research is Designing Tourism Experiences for Inner Transformation.  She is the first woman recipient of the UNWTO Ulysses Prize, and was the first woman President of the prestigious International Academy for the Study of Tourism.  Pauline is a regular keynote speaker at tourism conferences around the world, and has consulted with World Bank, APEC, and UNWTO.  She teaches with the Art of Living Foundation and is passionate about blending her study of tourism with her interest in the transformation of consciousness and the planet. 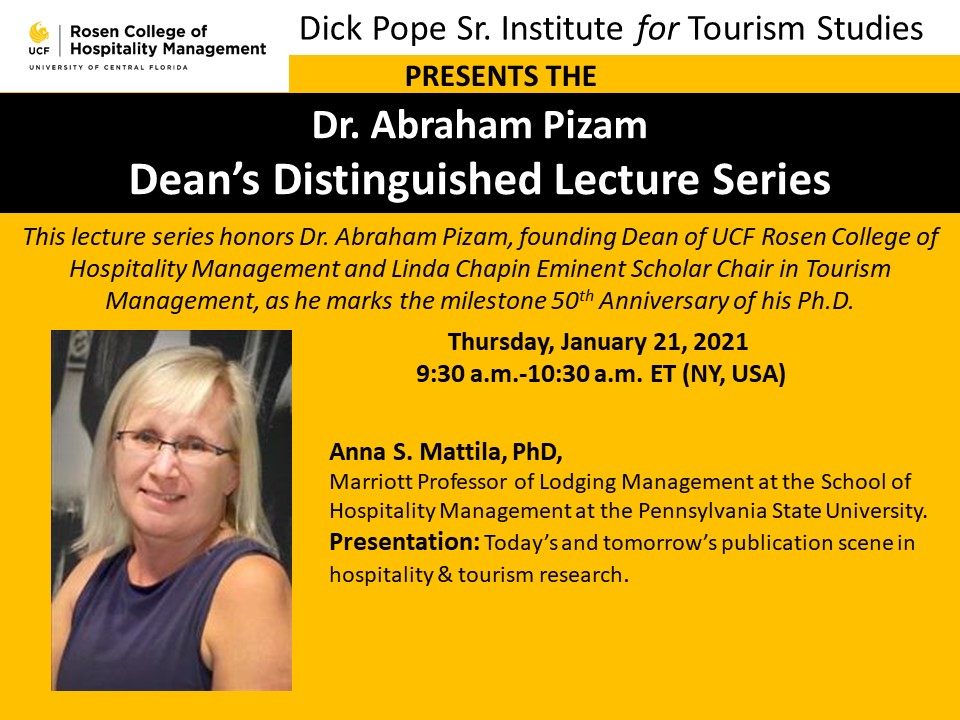 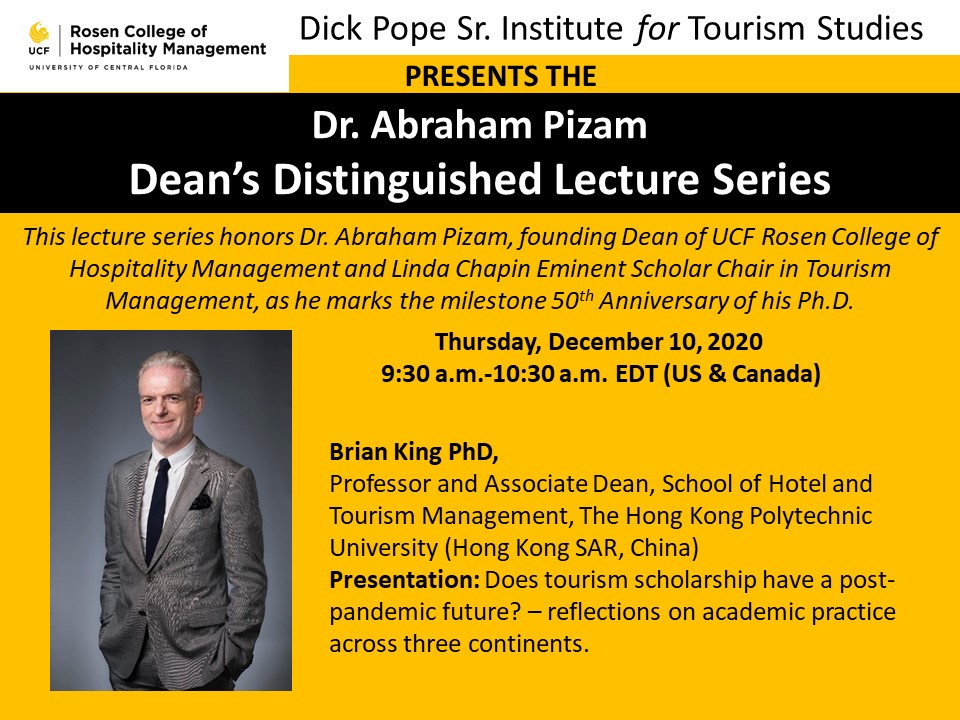 Brian King has been Associate Dean and Professor at The Hong Kong Polytechnic University since 2012. He was previously in Melbourne, Australia where he completed a PhD (Monash University) and worked at Victoria University as Head of the School of Hospitality & Tourism and latterly as Pro Vice-Chancellor (Industry & Community). Originally from Scotland, he specializes in tourism and culture in Asia and in hospitality leadership. He has published books and articles on integrated resorts, marketing, VFR travel and Asia-Pacific tourism. He is Founder and Editor-in-Chief of Tourism, Culture & Communication. His industry experience includes manager and/or director roles in airlines, tour operations, destination management, cruise operations and hotels. He has held visiting professorships in Europe, USA and the Pacific, and is a Fellow of the International Academy for the Study of Tourism and of the International Association of China Tourism Studies. 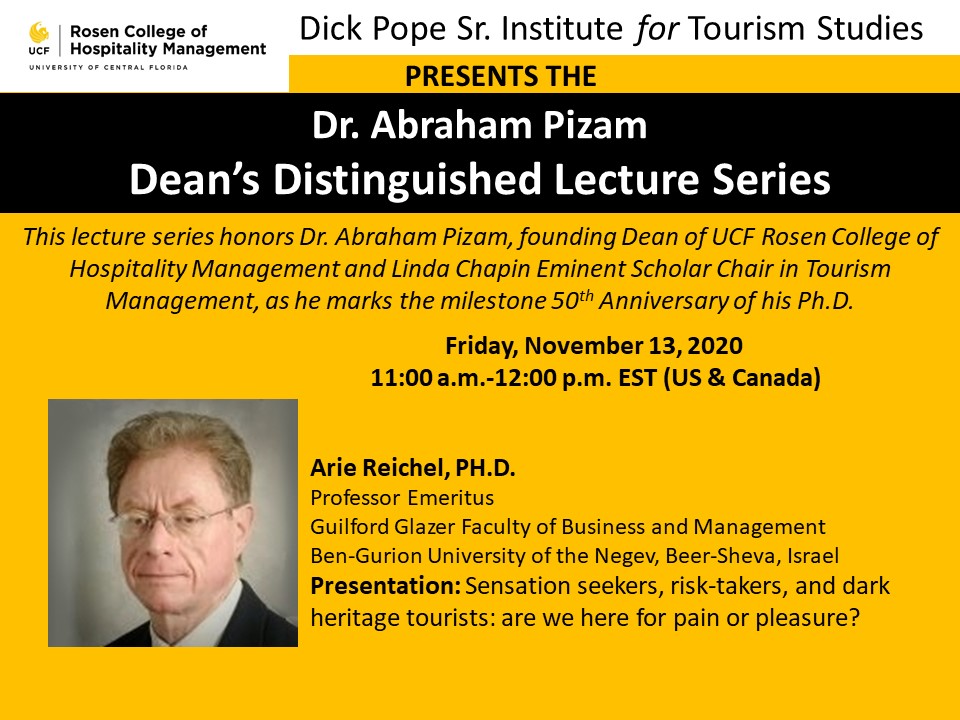 Arie Reichel is Professor Emeritus and the former Dean of the Guilford Glazer Faculty of Business and Management at Ben-Gurion University in Israel. He is the Founding Dean of BGU’s southern campus at the resort city of Eilat and the Founding Head of the Department of Hotel and Tourism Management on BGU’s main campus in Beersheba.

Arie published dozens of articles in top tourism and hospitality journals. For example: Annals of Tourism Research, Tourism Management, Journal of Travel Research, and the International Journal of Hospitality Management. He is a member of the editorial board of six journals, and acts as an ad-hoc ‘blind referee’ to many other journals. His main current research interests are in tourists’ behavior and managerial planning issues in the hospitality and tourism industry. Recently he focused his scholarly work on the inclusion of disenfranchised segments in the tourism experience, in term of servicecape, both physical and human.

Prof. Reichel earned his Ph.D. in Corporate Strategy at the University of Massachusetts in Amherst, MA. After serving as assistant professor at New York University (NYU) Stern School of Management, he joined BGU in Israel. He has also taught courses and done consulting work in Brazil, Cyprus, France, Jordan and Bethlehem in the P.A. 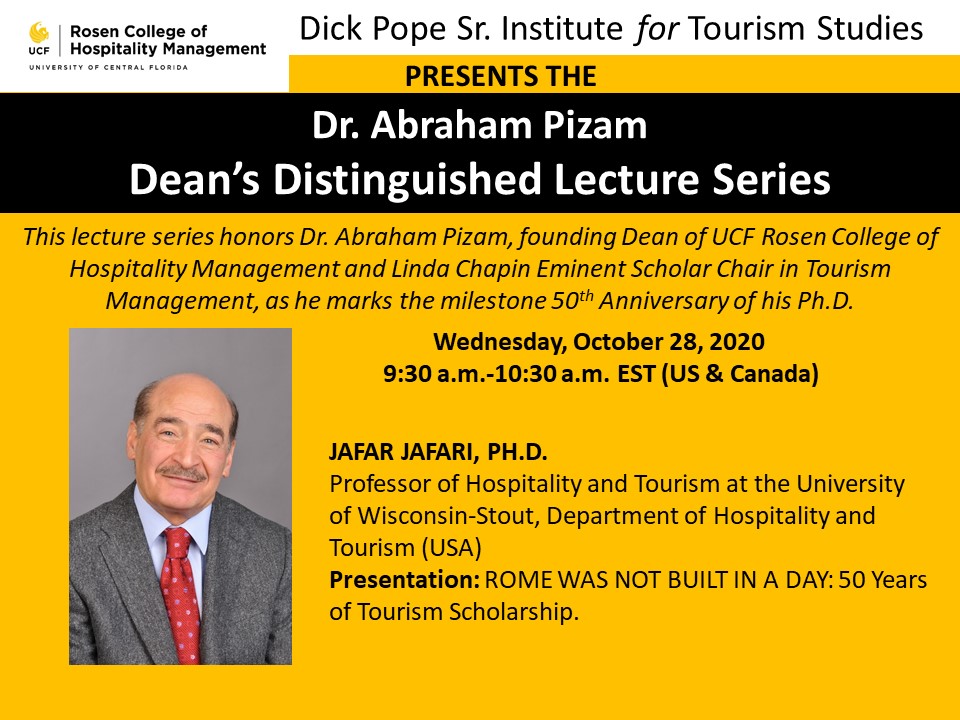 What Does Queen Elizabeth II’s Death Mean for the Future of the Monarchy?